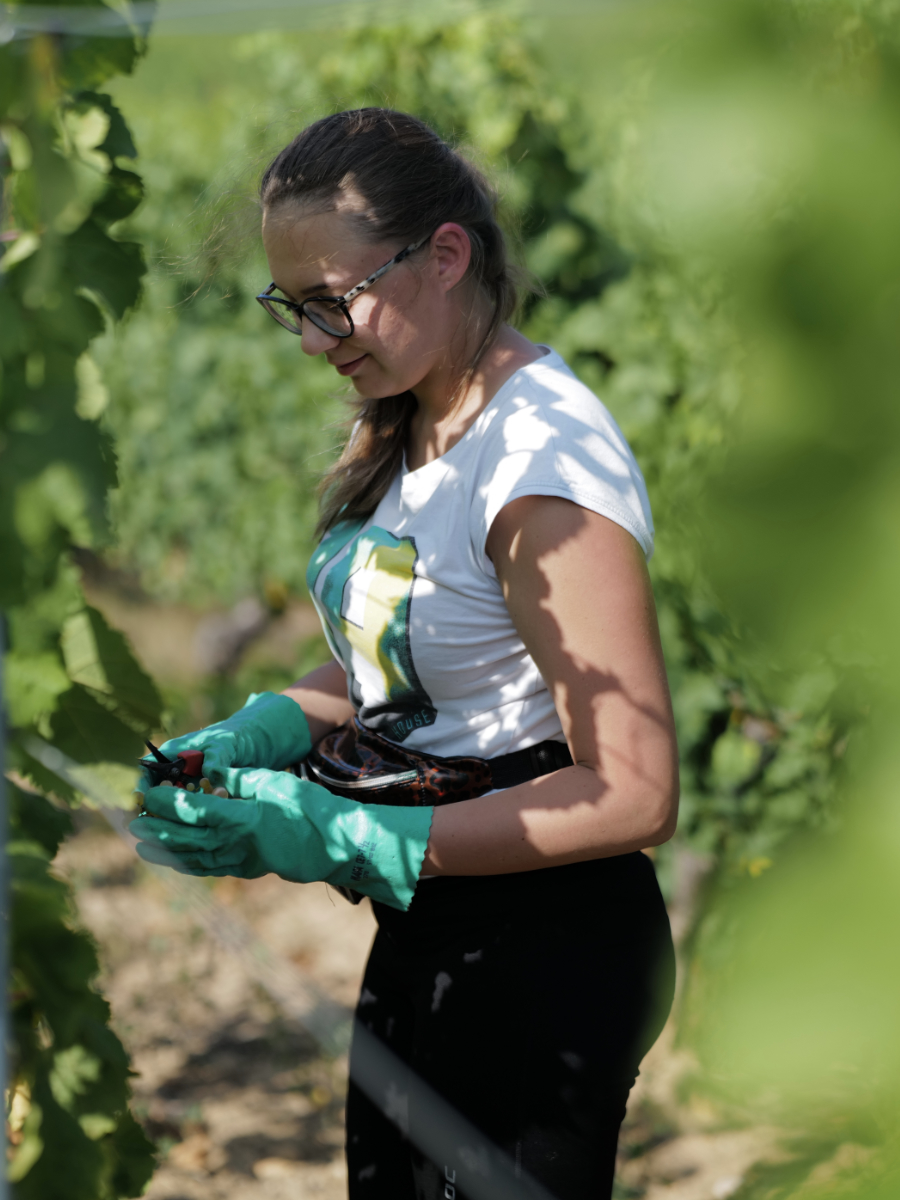 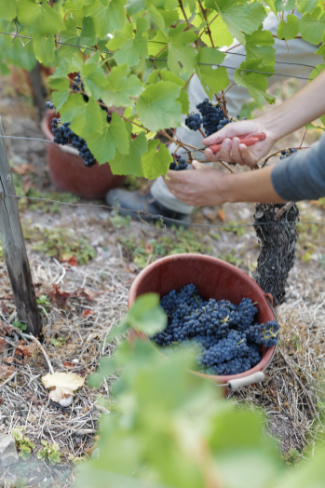 Winegrowing in the Rheingau region and in Rüdesheim

Wine experts reach for superlatives. The English writer Hugh Johnson speaks of the “best winegrowing region on the Rhine”. And Frank Schoonmaker’s “Encyclopaedia of Wine” states: “In the opinion of many experts, this is the most important winegrowing area in the world”. They are talking about the Rheingau which, with a cultivation area of only about 3,000 hectares, is one of the smallest winegrowing areas in Germany.

In geographical terms, the Rheingau winegrowing area is a strip of land along the Rhine extending from Flörsheim to Lorchhausen, with a length of 38 kilometres and a width of two to three kilometres. The area offers the perfect climate for growing wine, as brotherhoods of winemaking monks discovered here many centuries ago. This section of the Rhine is broad, almost resembling a lake in places, and reflects the sunlight. To the rear, the woods of the Taunus hills offer protection against the cold northerly winds.

The average climate values in the Rheingau region guarantee excellent growth of the vines: 9.9°C average annual temperature, 1643 hours of sunlight and annual precipitation of only 536 mm. In addition, there is a remarkable variety of soils with slate, quartzite, sandstone, gravel and loess, which adds to the rich nuances of Rheingau wines. The Rheingau vintners have a high level of education. Almost all independent winegrowers in the Rheingau have completed training as a winemaker’s assistant, master winemaker or viticultural engineer. They are vintners who preserve necessary traditions (as is evident in the retention of the classic grape varieties Riesling and pinot noir, in particular), but are also open to progress in cellar management. The far above-average ecological awareness of the Rheingau winegrowers is also worthy of recognition.

There are approximately 380 self-marketing wineries in total. Most of these are family companies with cultivation areas of four to eight hectares. In addition, there are three local cooperatives and about two dozen larger wineries (cultivation areas of between 10 and approx. 50 hectares), some of which are heavily involved in exports and thus make the good reputation of Rheingau Riesling known throughout the world.

The history of winegrowing in Rüdesheim can be traced back to Roman times: In 1900, a crescent-shaped Roman vine pruning knife was found in an excavation pit near Brömserburg Castle in Rüdesheim. This means that wine was harvested by residents back in the third century AC, as recommended at the time by the Late Roman Emperor Probus. More archaeological evidence was found in Merovingian-Frankish graves in the Oberstraße street in Rüdesheim, namely wine glasses as burial gifts. Also, Emperor Charlemagne, who frequently resided in his Ingelheim Palace and knew the Rheingau region well, is said to have recommended planting the nobler Orleans vines here due to the favourable climate. However, the Archbishops of Mainz between the 10th and 14th centuries were responsible for the growth of the winegrowing culture to its current level. The church dignitaries encouraged the clearing of the forests along the Rhine in order to plant vineyards. Winegrowing in Rüdesheim has only been documented since 1074. The numerous monasteries and noble families were also involved in expanding the wine industry, for example. They demonstrated an absolute commitment to quality and an impressive interest in the development of new and improved methods in winegrowing, cellar management and marketing.

All German wine predicates originate in the Rheingau and were only used for wines of exceptional quality. For example, the term “Cabinet” was already used over 250 years ago for valuable harvests of good vintages that were stored in “Cabinet” cellars. The German wine terms Spätlese, Auslese and their higher-grade varieties Beerenauslese and Trockenbeerenauslese were also discovered in the Rheingau. They are still considered specialities here which cannot be grown in large quantities every year.

Asbach – The spirit of wine

Asbach’s home is Rüdesheim on the romantic Rhine, with its many attractions and outstanding vineyards. Asbach, the famous German speciality from Rüdesheim am Rhein, has been in existence since Hugo Asbach founded his company here in 1892. Generations of connoisseurs have enjoyed the special taste of this unique distillate made from selected wines. The “spirit of wine” can be found in Asbach – and this has many qualities. It stands for enjoyment, trust, competence and top quality. All Asbach products are characterised by the selected base wines, special care in production, and refinement by means of the secret Asbach maturing and finishing process. The classic, Asbach Uralt, impresses with its well-rounded taste and harmonious bouquet. In addition, there are special products such as the tempting praline liqueur Madame D’Or – an absolute world first. For connoisseurs, the Asbach treasure trove contains additional top-quality products of distillation art, e.g. the Asbach private brandy matured for 8 years, which was awarded the “Worldwide Brandy Trophy” at the “International Wine & Spirit Competition” in 2013. The most valuable rarity from Asbach is the limited special edition of the luxury distillate Johann Wolfgang von Goethe Vintage Reserve 1952. Experience the world of Asbach and the variety of all Asbach qualities in the Asbach Visitor Centre.

The name Rüdesheim is associated not only with the romantic Rhine and the famous German speciality Asbach, but also with the Rüdesheim coffee specialities. Rüdesheim Coffee was developed specially for Asbach in 1957 by Hans Karl Adam, who was a famous German TV chef in the 50s. It tastes best from the original Rüdesheim Coffee cups. Add three cubes of sugar to 4 cl heated Asbach Uralt, ignite and stir until the sugar has dissolved. Then fill with hot coffee, top with sweetened whipped cream, and sprinkle with dark chocolate shavings. Rüdesheim espresso and Rüdesheim iced coffee are also specialities! You can purchase the original Rüdesheim Coffee accessories in the Asbach Visitor Centre.

The invention of Asbach pralines in the 20s is thanks to the fact that the idea of women and alcohol in public was inconceivable at that time. This inspired company founder Hugo Asbach to create the Asbach praline. The globally protected cold-casting process, developed by Asbach, took not only the ladies’ world by storm. Asbach pralines are small but impressive masterpieces of praline art. Today, they are produced under license by the Reber family company Rüdesheimer Confiserie-Pralinen GmbH & Co. KG. The pralines have experienced an astounding renaissance in recent years. The latest product innovations are the Asbach Minis and the Asbach Cream Minis. The largest range of Asbach pralines can be found in the Asbach Visitor Centre.

The first report of the growth of “secrant vines” originates from the Rheingau in 1435. Since then, this variety has been cultivated with special care in the small area on the Rhine.

Today, the Rheingau has the highest proportion of Riesling of all winegrowing areas in the world, with 84%. Other grape varieties would certainly provide a higher yield, but they have never been able to establish a firm hold in the Rheingau. After all, Riesling is considered perhaps the best white wine variety in the world due to its fine breeding and elegance, its characteristic bouquet with delicate peach scent, and its distinctive, crisp acidity. The perfect soil and climate conditions for Riesling exist here in the northerly winegrowing region at approximately the 50th degree of latitude. The long ripening season allows the grapes plenty of time to absorb many mineral substances from the soil, which are important conditions for the fruitiness and fullness of the wine. The wine harvest rarely begins before 15 October in Rheingau, and often continues until late November. A warm autumn is important for the ripening of the Riesling and ensures the required sugar formation in the grapes.

A special feature here can be the infestation of the grapes with the Botrytis Cinerea fungus. If the infestation occurs, as desired, with ripe grapes, water evaporates and the other constituents of the grapes are concentrated so that high-quality predicate wines can be obtained from the harvest. However, even if this “noble rot” does not occur, Rheingau Riesling impresses with its pure, well-bred and fruity nature. The wines have many extract substances. Their alcohol content is usually not very high (between 9 and 11.5% vol.). Particularly the dry and semi-dry quality wines and cabinet wines, with their distinctive taste and crisp lightness, are increasingly preferred as an accompaniment to food. 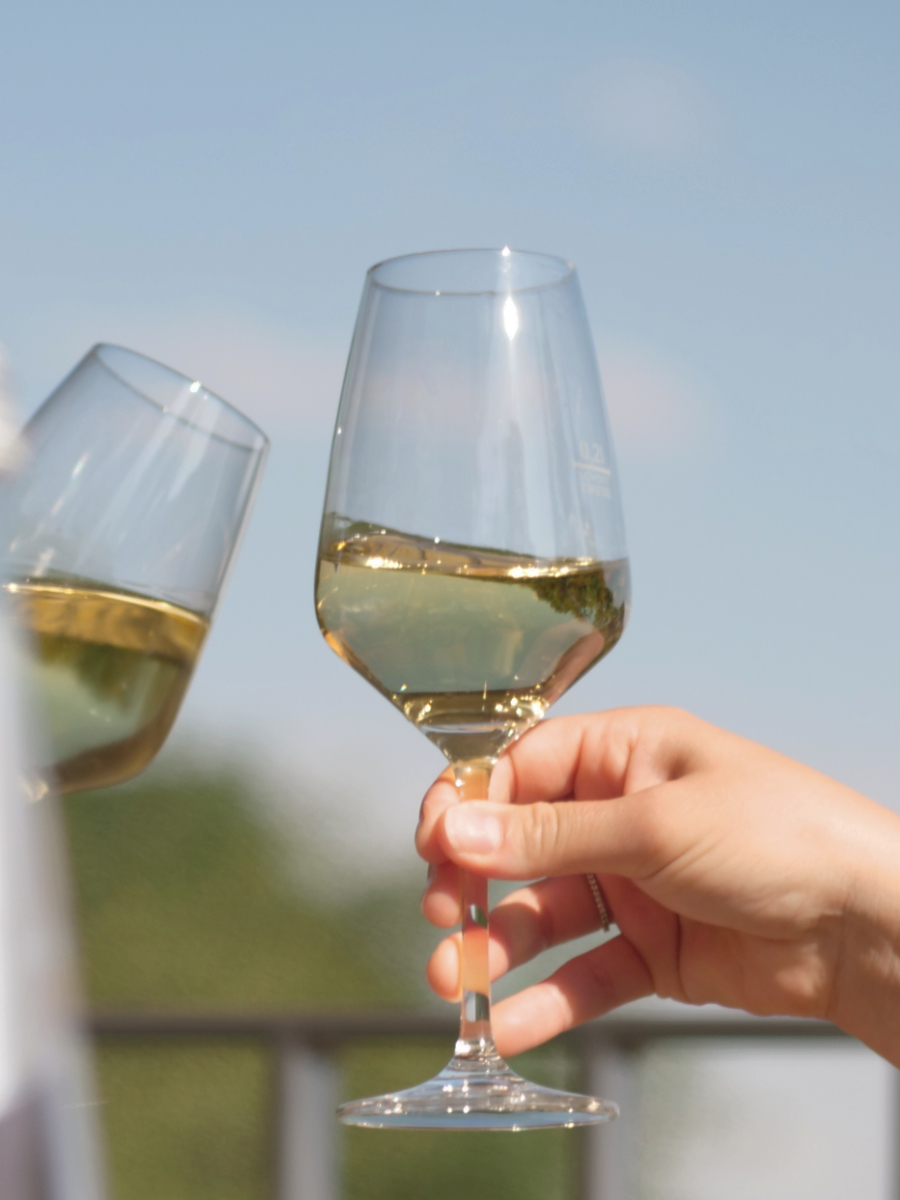 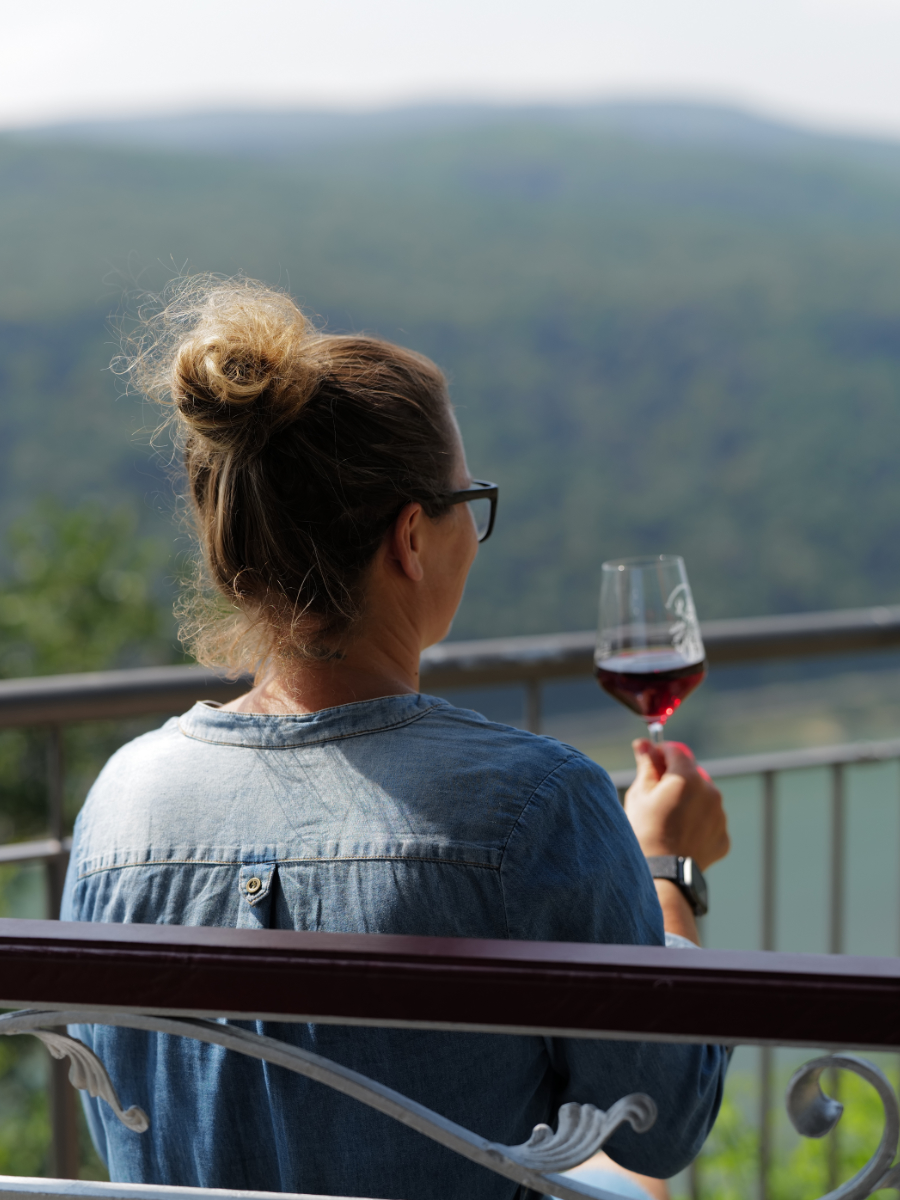 Pinot noir, or Spätburgunder as it is known in Germany, is to red wine varieties what Riesling is to white wine varieties! Pinot noir is a true speciality in the Rheingau, cultivated on approximately 160 hectares and most common on the steep sites of Assmannshausen. The first mention of pinot noir in Germany is from 1318; it is likely that Cistercian monks brought it from Eberbach to the Rheingau, where its cultivation is documented in 1470. This red wine has been grown since at least 1507 in the “home place” of Assmannshausen; a wine researcher in 1829 wrote: “It has high value, it has the highest degree of strength even compared to the Burgundy red wines”. Rheingau pinot noir is undoubtedly one of the best red wines in Germany, but it is lighter, softer and more velvety than the rich, full-bodied and high-alcohol wines from France. Small, fully ripe, dark blue grapes result in lighter-coloured wines with a subtle, delicately spiced aroma and elegant, warm style with pleasant acidity, which also ensures that the wines remain storable. Over the years, the wine can increase its initially restrained fire and express its flavourful nuances. Occasionally, this grape is also used to produce a refreshing and full-bodied pinot gris white wine. The finesse of the Rheingau pinot noir is also partially due to the relatively low yields.

There is hardly a festive occasion in private or social life where one does not toast with a glass of good sparkling wine. The selection of high-quality wines with full aromas and balanced flavours is essential for the quality of a sparkling wine. Only from carefully chosen grape varieties does the cellar master select wines that would make a good sparkling wine. This art of “refining” the selected Rheingau wines has been practised in our region for 150 years. Enjoy it as an aperitif, with food or simply when the mood takes you – sparkling wine always stands for enjoyment and joie de vivre! 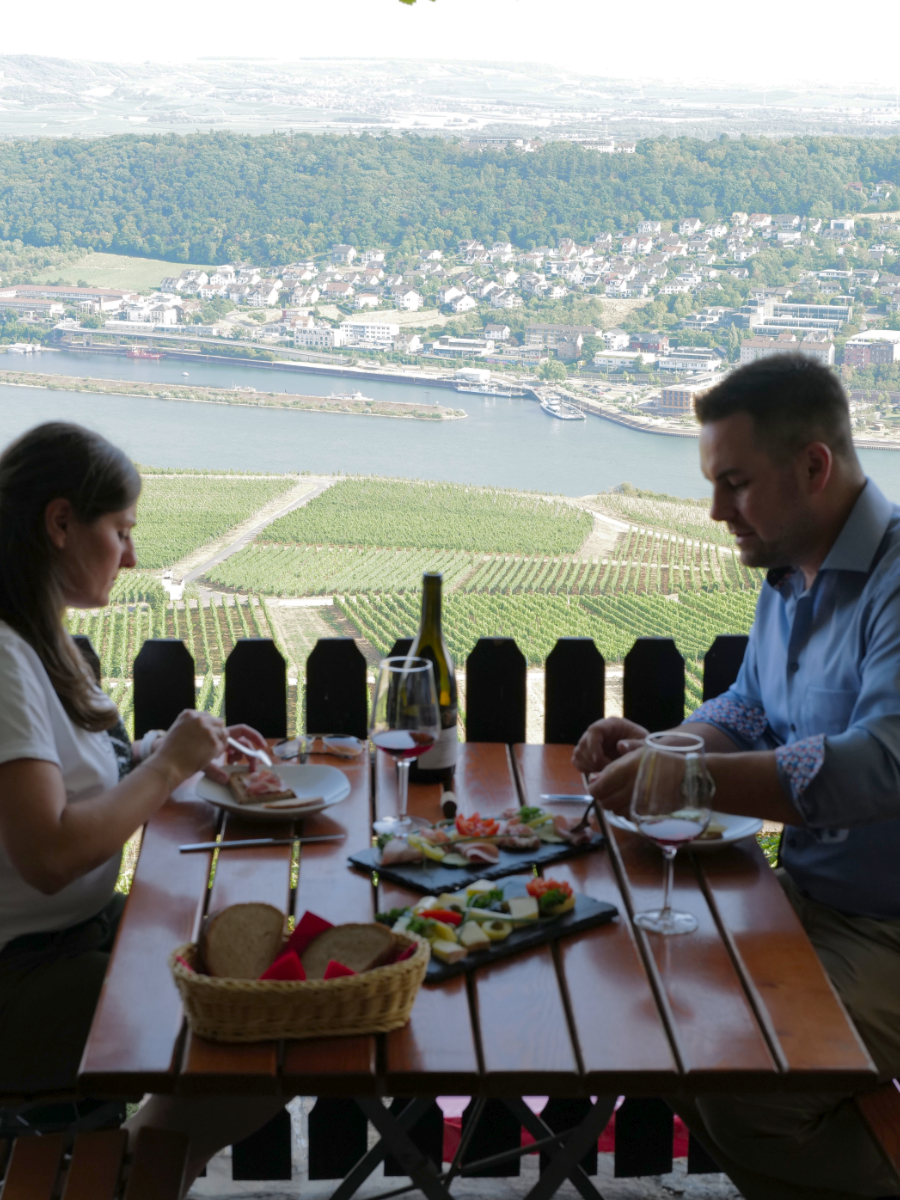 In Rheingau, the typical way to enjoy wine and sparkling wine is in a Straußwirtschaft (wine tavern). The “Strauß” symbol (a wreath in front of the entrance door of the winery) shows you that wine is served, but watch out – opening times are limited due to the maximum serving period of four months. You can check the list of open wine taverns to see when the vintners invite you to enjoy their wine and the local cheese specialities “Handkäs mit Musik” and “Spundekäs“. In contrast to the Straußwirtschaft wine taverns, the wine bars that you will find at various wineries can serve guests all year round.